Now I had two Elizabethan coifs, as described here - one made from Tudor Tailor pattern in three pieces, presumably a modern construction method, and one using a one piece construction.

Making the proper hairdo took some fiddling. The basic idea was to make two braid and sort of tie them on the top of the head. That worked surprisingly well, even while my hair have a tendency to slip out of all manner of hairstyles. I tied the braids with bands, and used some hairpins to keep the braids from slipping down (the sturdy, u-shaped kind of pin).


As expected, I have small strands of hair loose everywhere, looking odd. Please let's just pretend I did this on purpose, for testing how well the two coif keep hair in place! 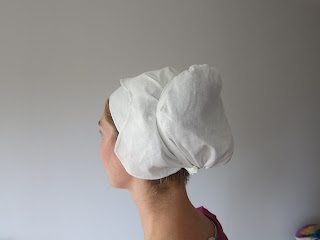 First attempt at tying on the coif. Mostly it looks ok, but there is a weird shape at the bun. Apparently I need need to fill it with hair! As I just "happened" to have a box with hair I saved from my hairbrush for a year (just in case I would ever need it for costuming...), I used some of it, and pinned it onto the back of my head to fill up the circle made by the braids.
Then I put on the forehead cloth and the coif again, and tied the strings around the hair.

And finally the result with this coif: now with more proper clothing. 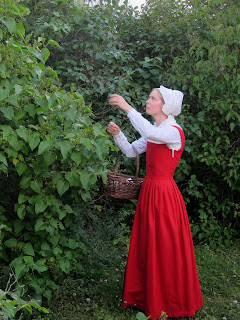 I then went back in to adapt the hairstyle for theTudor Tailor coif. Here, a smaller bun was needed, and as it had a bag shape, I just put some of my "hair balls" in the coif before putting it on.

This version is not nearly as good as keeping the hair in, as the forhead cloth is not tied around the head. 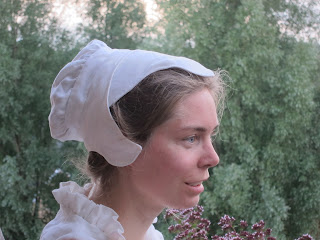 I still belive more in the other copnstruction method, but this looks good. It has more the same shape as the picture in the beginning of this post, with only the forehead cloth extending on the top of the head. It did not want to stay securely, so I ended up putting a hairpin through the fabric and into the hair bun on the top of the head. The same effect as the plastic comb, but without the plastic. That way, it stayed on well, even thou it is not nearly as well secured as the tied on version. 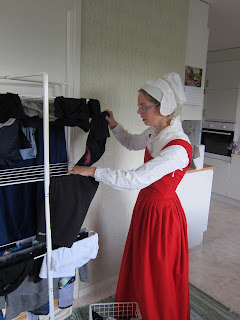 What the item is: Two coifs for a working woman in 1560-1570 England - using construction that is presumably modern (1) respectively period  (2)

How historically accurate is it?
(1) probably just halfway. Fabric is correct, but it is machine seamed in all the non-visible seams. And while I have the deepest respect for the knowledge and skill of the Tudor Tailor authors, I believe that their coif pattern is a modern way of achieving the right look, (and an easier way if you don't have massive amounts of hair).
(2) quite close. Hand seamed, linen, and a construction that seems plausible. Still needs some fiddling with the shape of the coif to get the perfect look.

First worn: nothing planned yet. I rarely use this dress, and this was supposed to be a quick way of making my outfit more complete just in case I would want to wear it for something.

Total cost: Small amounts and some reused fabric, so almost nothing.