This is a quite long post. In short, it is about my research about what types of skirt supports and petticoats that could have been worn under a trained 1876 skirt - a transitional year between the very full skirts of early bustle era and the  narrow natural form.

Somehow, my first historical sewing project of the year turned out to be an early natural form dress. Two months ago I did not even like natural form, but all it took to change my mind was an enthusiastic friend showing some pictures :-) As I want to do the transition between "late early bustle" and early natural form years, ca 1876, I have been thinking a lot about petticoats, crinolines and bustles. I could even go so far as saying I have been a bit obsessed by skirt supports lately... As usual for me, I concentrate on the fashion of those wealthy enough to follow the latest fashion.

Before I start properly, I will define some of the terms I intend to use. By structural support, I will be meaning any kind of skirt support that either has boning in it or serves only to add volume. This includes for example boned bustles small and large, crinolines, and the smaller ruffled horse-hair bustles. Petticoats on the other hand could add a quite considerable amount of support if they have ruffles, cording, tucks, is heavily starched, or some other trick used historically, but they are still basically a skirt. (Petticoats with built-in boned bustles will be structural support, for this post...)

Transition periods in clothing are interesting but tricky. Nothing is as clear as for the typical dresses of an era.
For early bustle period, there is the typical bustle dress, and good patterns are available for bustles and petticoats.

For the narrower form of natural form, the only support needed would probably be a petticoat with lots of ruffles (and maybe a small tournure), or a slimmer bustle with small horse-hair ruffles


But in between? What happened to the bustle between these two extremes, as the skirt narrowed, and how fast did it happen? The shape I am aiming for is like in these fashion plates from 1876-1877. 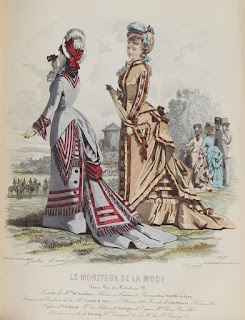 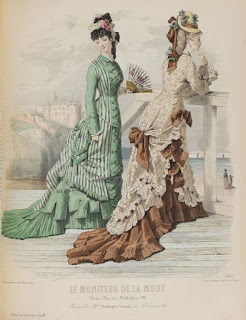 Little addition at hips, quite a lot volume that needs support at knee height, and a train that needs some volume and protection. The question does not get easier by the fact that the choice of a structured skirt support (bustle, crinoline, ...) and choice of petticoat is by no means independent. For full blown bustle dress, you'd obviously need a bustle, but for smaller fashions, the same shape could most likely be achieved either with some structured support and a plainer petticoat, or by using petticoats with lots of volume.

In trying to figure this out, I have been reading blogs and webpages of other people making natural form underskirts, and I have been looking at fashion plates, advertisements from the period, and pictures of extant garments.

Searching and asking, I found some other people had been doing the same.
I will not put their pictures here, but follow the links to see their great work!
Historical Sewing made an 1876 trained and ruffled petticoat with corded ruffles, and made a good tutorial.
The Modern Mantua-Maker made a full set of underwear for first half of natural form era, including petticoat with ruffled train and a boned skirt support.
There is the Truly Victorian 1879 Petticoat with Detachable Train.
And Yesterday's Thimble has a good tutorial for an 1876 Petticoat with train.

Looking mostly at advertisements from the time, I found a number of options, depending on how much support you need and where you need it (hip, thigh, knee or ankle height).

Petticoats with more or less ruffles:

The latest picture is from 1883, a bit later than mine, but it is not improbable that this variations have been around earlier as well. At the least, it illustrates how many sorts of skirt supports that were available at the same time.

From reading other peoples work and looking at period information, I got the conclusion that just one petticoat would not be enough but that several probably could work. That meant that the choice was either to make at least two petticoats, both with lots of ruffles, or making a structured support and get away with a plainer petticoat, with only enough volume to hide the boning of the structured support. From what I could see from my advertisements, both options could be plausible. Comfort spoke for the second alternative. I find padding with petticoats to be a lot heavier and warmer than using a crinoline/bustle to get the same volume. Also, laziness did - I think it will take me less time and energy to make structured support+petticoat, than it would take to make several petticoats with lots of ruffles.

After way too much thinking (obsessing?), I chose to base my work on this one: 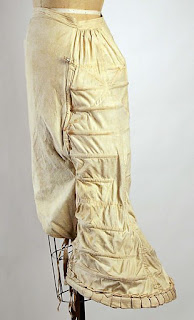 It has some support all the way down, including some for the train, which means minimal need for petticoats with heaps of flounces. For petticoat, I chose a simple one with only one ruffle, and gathers in the back to control the amount of fabric. It is based on this one, and very similar to the one on Yesterdays Thimble: 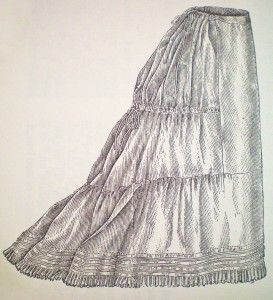 I made mine with a longer train, to support and protect the train of my skirt. I decided I did not need the versatility of a floor-length petticoat with a separate button-on  train.


Limitations of this work

I have not read any text sources, only looked at photographs and pictures of structured supports and petticoats. This means that I have no period information on how thay were actually worn and which combination of support and petticoats that would have been common, only own conclusions. Also, I have never handled a petticoat properly made to give lots of support (for example a starched one with lots of ruffles and cording). Thus, I do not know for sure how much support they actually gives - I might be underestimating them.
In next post, there will be pictures of my bustle and petticoat!
Upplagd av Sara ÖT kl. 11:49