As I write this, I am on my way home from SteamCon in Gothenburg. It has been three very very nice days, and now I am happy and tired and a little bit sad that I have to go back to reality. (I know, I English was my first language, or just if I was less tired, I should be able to come up with some more varied and precise adjectives. As it is, I will just write lots of "nice" and "amazing" in this post, so now you are duly warned!)

The convention had a number of different workshops and discussions/lectures. I have made false metal mini book covers, a small chemical "volcano", and hair jewellery. But what I liked most was to talk to all nice (I warned you!) and interesting people. One day, I and my friend Karin just grabbed some random people who looked nice and asked if they wanted to have "fika"  (coffee and sweets) with us. They said yes, and I greatly enjoyed our discussions (for example, why is there so much brown and orange in steampunk? And are there sub-sub-cultures in English steampunk?). Steampunks are so nice and generous people! And it is fun that there is a nice mix of ages.

Of course, it was also very fun to look at people's clothing and accessories. So many different takes on steampunk! And as I am embarrassingly fond of being photographed in my steampunk and historical garb, I also greatly enjoyed wearing both my two new outfits ("the ghost detection box" and the "conservative steampunk gentleperson goes 16th century"), and my old favourite, the 1886 uniform dress. I will post about those later.

Here comes pictures of some of all the nice looking people I met. Of course, I forgot to take many of the pictures I wanted, so this is just a small selection. 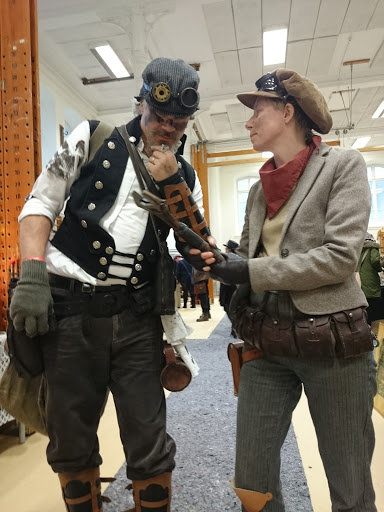 There were a number of well clad gentlemen.

Marianne, in her archaeologist persona, looking great both in day wear and evening wear. 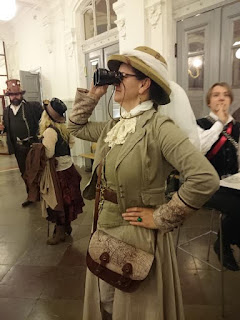 These two won first price in the craftmanship category of the costume competition. They had amazing level of detail, especially on the weapons. Hard to see in this picture, but his arrow tip is a flask of green liquid, with light in it!

This was all photos I remembered to take. Next posts will also be steampunk - they will be on my ghost detector box, and about my 16th/19th century cross over outfit.
Upplagd av Sara ÖT kl. 09:58