Last weekend, I was to SilwerSteam - Nordic Steampunk Faire 2017, and had a really great time! Wonderful location, nice people, fabulous costumes, and lots of interesting and enjoyable things to do. 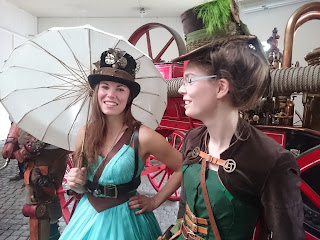 I had offered to hold some kind of "get to know people" event, and that was one of the first things that happened on Friday evening. At 18:00 when it was supposed to start, there was just me, a friend and one other participant. Soon however I had "caught" about 10-15 people - by having the mingle outside the main entry and asking everyone arriving if they wanted to join us! Being a bit nervous (this was the first time I did this kind of thing), I don't remember so much of what I talked to people about, but I hope people had a good time! 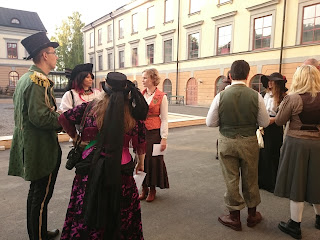 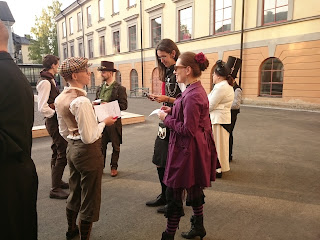 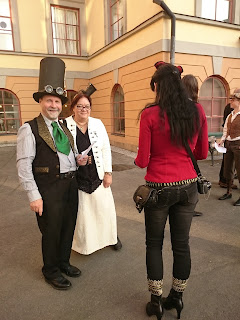 After that, I think I just walked around, mostly looking costumes and the venue. In the evening, we had a steam pub all to ourselves.
My costume for Friday was the Ghost Detection box, or more formally, the work-wear of an ectoplasmic residue detector workperson. I had made a broader tie and a softer hairdo than last time, which I think worked better with the overall look. 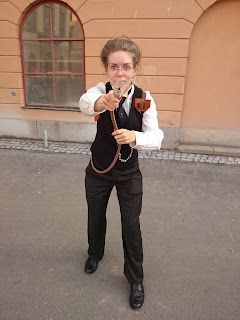 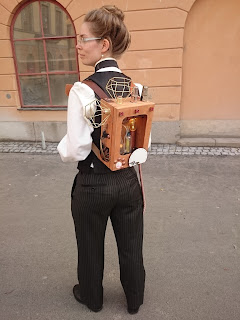 Saturday morning started off with a a wind orchestra playing outside of the venue. For me, who loves marches, it was quite emotional to hear two of my favourite marches being played! Great start of the day. 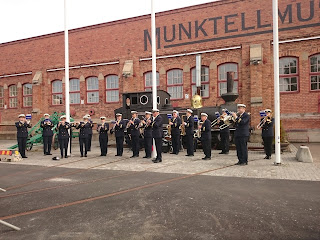 Then, I joined Director Munktell for a guided tour of the museum showing some of his inventions. 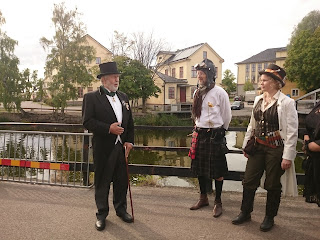 Later, there was people to talk to, and photos to take, and being photographed. I also went to a lecture on using LED in costumes, which turned out to be a lecture on programming the Arduino microcontroller to make it control a programmable LED strip. In that way, you can get lights that blinks and shifts color however you want. For me, it was very inspiring and seemed straightforward to do if you have some kind of experience in programming.

Then, on to the costume contest. I don't have any pictures of it as I was a part of it, but it was very fun to take part and to see all the marvellous costumes. And well arranged - we go to walk a round in the old engine hall, while the speaker told the audience about our costumes. There even was smoke when each of us was announced and entered stage - made me feel like a star!

My costume for Saturday day was the newly re-made forrest/mechanical dress. Here with Aurora in the engine hall, with all steam engines running and smoke coming up just in time for out photo. 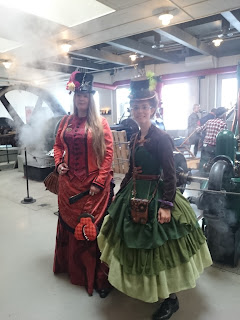 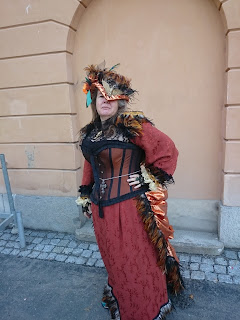 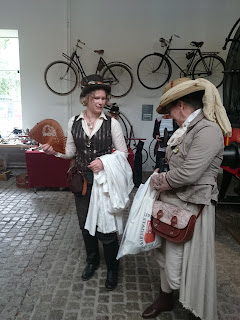 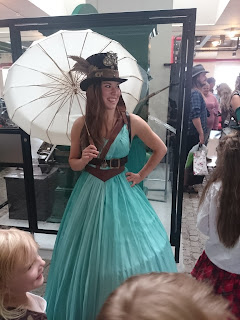 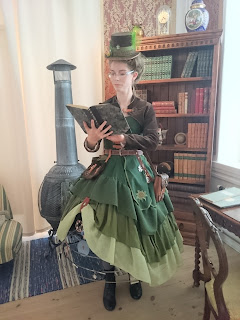 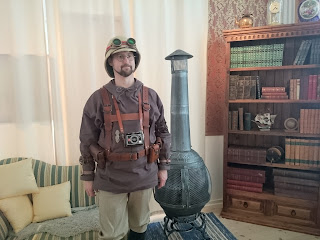 In the evening, I managed to eat too little and get a bit low, but I got get a "uniform picture" with  Henrik (Pilerud Cosplay) and Martyn. I definitly wouldn't mind seeing more steampunks wearing uniforms, and I think another uniform might be my next steampunk sewing project. 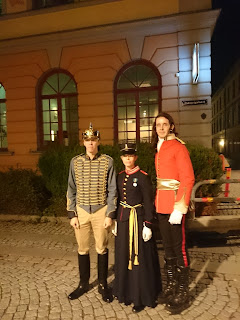 Did not take many pictures on Saturday evening, but it was nice to meet Lykke and Marianne again that I first met last year in Gothenburg. Also - that riding habit! 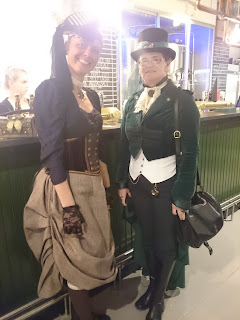 On Sunday, my parents joined me.

But then, everything has to end. Luckily for me, there was other steampunk enthusiasts heading the same way as I, so I got company on the train, making the fun ended less abruptly. And on the way, we had time to talk both steampunk, space based navigation (as in GPS signals) and the perils of inventing too good Artificial Intelligence. A worthy end of a marvelous weekend!

Do you have a blog post about silwersteam, or a picture collection that is not found via facebook? Please comment and give us a link!
Upplagd av Sara ÖT kl. 10:28