My latest make is a steampunk Admiral's uniform.
The inspiration for this costume comes from some different sources. The main inspiration was this, which I think is concept art for a character in an computer game, set in an alternative history 1880's. I also looked at 18th century coats, the gold-work embroidery on 19th century military uniforms, and some 1880’s does 1700’s ladies bodices. For those who use Pinterest, this is my inspiration board. 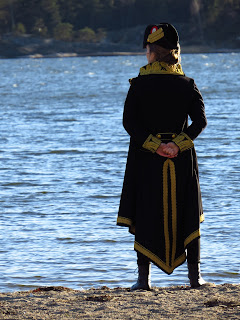 The coat is made in wool, with about 40 m of braiding hand stitched on collar, lapels, and cuffs. The wider trim is a vintage trim I found. The base pattern for the coat is actually from a Tudor dress, and then I constructed lapels, collar, and cuffs and added them. 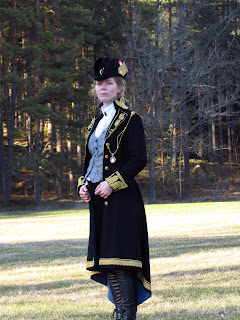 The hat is a 18th century bicorne, a model that was not uncommon for military wear during the 19th century.  I constructed the hat pattern based on a pattern I found on this blog, made it up in buckram and wire, and covered it with the same black wool as the gown.

The black wool is very easy to work with, as it drapes well, and the soft matte fabric efficiently hides stitches that would show on the right side in a more unforgiving fabric. That was important, as the lapels, collar, cuff, and the hat brim was finished separately and then hand stitched in place afterwards. The blouse and jabot is also made by me from my own pattern. The vest and leggings are from my modern wardrobe.
An important part when designing this costume was to make it flexible in size – more specific, it has to be able to fit over a growing belly, as I am pregnant. This was quite a challenge, as I don’t know what size I will be much beforehand, and hopefully, I will go to an event in my late pregnancy. Thus, the design with an open coat, a blouse with lots of width, and a vest that will later be changed for a much larger one. 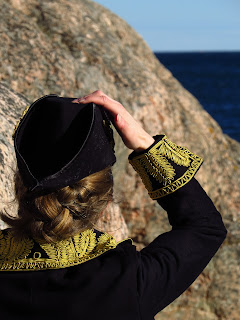 The biggest challenge, except for finding a size-flexible design, was designing the braiding and the other trim. I wanted the braiding to resemble the oak leafs embroidered on collars on military uniforms, organic and flowing but still powerful. It was important to keep the coat looking like a coat, not becoming a dress.
Details of the coat and hat:


As of yet, I have only worn the costume for a photo session, but I am very happy with how it turned out.

And as always, thank you Olof for the great photography!

What the item is: A steampunk Admirals outfit, consisting of coat and hat (new), blouse and jabot (made for previous costumes), and modern leggings and vest.

Fabric: Black wool for hat and coat. Cotton for blouse and jabot. Scraps of silk for the cockade on the hat.

Pattern: Coat is a remade version of this 16th century English Tudor overdress, which is from the book The Tudor Tailor, but I have obviously modified it quite a lot, with collar, lapels and cuffs of my own construction. Blouse is the one I drafted and made for the Edwardian vampire.

Notions: old buttons from some type of civilian uniform, 4 m of vintage gold band and around 40 m of gold soutache braiding, a few very small clock gears for decoration on the hat.

Hours to complete: probably around 40 h for the coat, most of that spent hand sewing on all the gold trim, and at least 10 h for constructing and making the hat.

First worn: for photo shot at Femöre outside Oxelösund.

Cost: 500 kr, for the gold band and soutache braiding (not all of it used), as the rest was remakes, from stash, or from the wardrobe.