Last weekend, I got one of those crazy ideas that seems impossible to get rid of. It started when I learned that our grocery store had a competition were first prize was food for ten years (in the form of gift vouchers at their store.). The task in the competition was to photograph yourself with a bag from their store and upload it. Me and Olof started to jokingly discuss if it could be possible to win without having cute children or cats to put in the picture. I suddenly got the idea to make myself a 18th century dress from their paper bags and use for the photo. I managed to resist for a day, but on Monday evening, I could not resist any more (the fact that I had planned to do some workout to strengthen my back that evening and to do some other boring stuff had nothing to do with it, I promise!).

Once decided, I went and bought seven paper bags and started working. I used the same pattern as my previous 18th century dress, so I knew the fit was good. The stiff and conical silhouette of 1760-1770's lended itself quite well to the stiff paper, but I had to give up on the sleeves, they just tore off all the time. At least, it was not a problem to get enough width over the hips - no need for bumroll or multiple petticoats here! The bodice and side seams of the skirt are taped with duct tape, and the skirt are then pleated to a waist band and just pinned in place. After all, it only had to look good enough at one picture, so no need to overdo it. 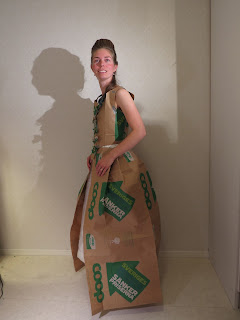 For the competition, I chose the angle "getting time and money left for my hobby", so I dressed up in my paper dress and made a vaguely 18th century looking hairstyle. Then Olof photographed me pretending to work on an already finished 18th century dress. We had to get lamps from all over the apartment to get good enough light. It was all very fun!


The facts:
What is it: a 1770's inspired dress in paper for a competition

How historically correct is it? Well, not very... The general shape of the bodice and skirt is ok, but obviously not construction, sleeve-less-ness, material or total look.