After seeing BBC's  TV series Wolf Hall set in Tudor (16th century) England, I suddenly found myself needing an 16th century upper class gown. As I did not expect to have much use for historically correct 16th century men's clothing, I got the idea to combine it with pants and shirt with a 19th century feeling, and call it steampunk. I also wanted to push the boundaries of steampunk a bit - how much can one deviate from "standard" steampunk clothing and still have it clearly recognizable as steampunk? Most notably, I wanted to avoid all the gears (you'll see how well that went...), and the corset and looped up skirt in women's clothing (nothing wrong with that, I just felt like doing something entirely different).

In the end, this was the result. Pictures from Gothenburg SteamCon, thanks to Karin for patiently photographing me with my mobile phone camera! 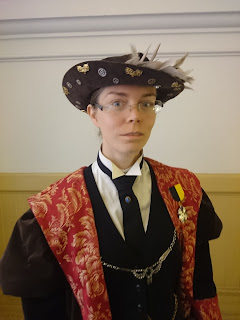 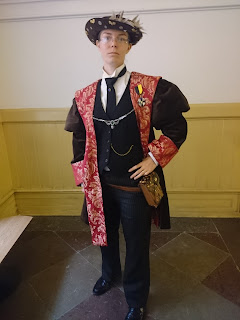 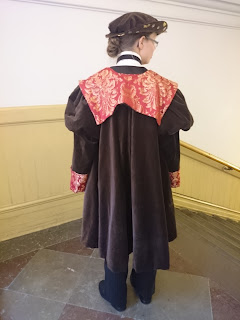 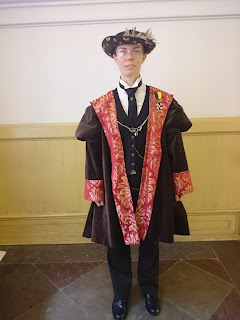 As you can see, in the end I added some gears anyway, on the bag and the hat. After all, I do like gears even if I think there can be too much of them, and I thought the costume needed a clear "this is steampunk" marker. 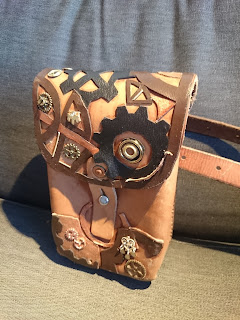 The bag has added pieces made of painted leather, and some "random shiny stuff" glued on.

I am only partly satisfied with the result. I liked a lot to wear this outfit, but as a garment, I feel that there is some work left to do on the gown. I used the pattern from The Tudor Tailor book, so I had to resize it from "standard men size" to "me size". I thought that would be very simple, as this is not exactly a fitted garment, but it was lot harder than expected. First I scaled it down before drawing the pattern, and then I made a test garment, but I still had to make the actual garment smaller as well. Especially the sleeves turned out way too big  - as large as my waist! Ridiculous. Shrinking them meant making the arm holes smaller on a almost finished garment, and then the over sleeves turned out too small instead, and... let's just say it took a while longer than expected, and the gown still does not hang really well. Also, I did not understand all the directions for sewing it that the The Tudor Tailor provided, so I had to make up as I went instead of just following directions.

From the pictures, it is clear that I need to make the sleeves shorter, and add some boning to the over (puff) sleeves to give them more puff and less hanging sadly.

I had been thinking that it would be nice to have something like a chain of office to wear with this, but I had not been able to find anything I liked, or any idea on what I wanted to make. In the Bazar at Gothenburg SteamCon, I was talking to Lykke Banck who has the shop Lucky Gears, and she offered to make one for me. She even finished it the same morning, so I could wear it at the convention! It might not be obvious from the picture (this picture is taken at the very end of the convention so I am quite tired at the time) but I am very happy with how the costume looked with the chain added! I just needed to fix it to the coat somehow, as it kept sliding off.

The pieces: Hat and gown made by me. Trousers bought from a second hand store. Shirt is a standard shirt, modified so that a bought collar could be attached instead. A black tie from husband's wardrobe. Bag is bought but heavily decorated by me. A clock chain used to hold gown together, and a cravat tie, both likely antique, that I got as gifts. Black modern men's shoes ("Olof, doesn't you need new shoes? I can take care of your old ones."). A medal.


Fabric of gown? Brown velvet from IKEA. Red polyester brocade, previously bought to be a women's 16th century dress. Red cotton for some parts of the lining.

Hours to complete? No idea. A lot longer than I thought, and so long that I was very tired of it in the end.
First worn? At the SteamCon steampunk convention in Gothenburg in November (my blog post of that here).
Upplagd av Sara ÖT kl. 05:37