To the steampunk convention, I wanted to try to make some "hardware", not only sewing. The result was this: my "ghost detection backpack". Here I will first show some making of, then the pictures of the result. 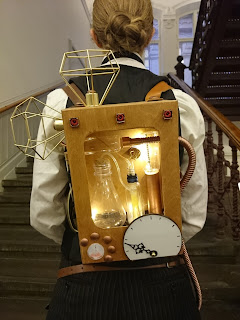 It was the first time for me making something that required drilling, super glue and paint instead of sewing and embroidery, so it was a both scary, difficult, and fun project.

It took me quite a long time to decide how to arrange all the stuff in the box. This is what my hobby room floor looked like for a quite long time, as I was trying out how to place things and painting random stuff copper coloured... 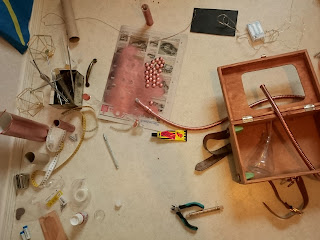 The base is a wooden box, which I got help to make a big hole in the front in. Then I added lots of stuff. The "antennas" at the upper left outside of the box is candle holders turned upside down and fastened. The copper tube at the outside, going to the hand-held detector, is a shower hose painted copper. The box is lit up by a battery-powered LED decoration wire. Inside are small plastic boxes intended for keeping shampoo and such in when travelling. I did not want to use too many glass containers even if it had felt more steampunk, due to the not negligible risk of me dropping the whole thing and breaking glass. The are also some thin plastic tubes, some of them painted copper, and a copper-painted cardboard tube. (Some of the tubes are actually "borrowed" from my Lego Technic set, but don't tell any Lego fan I did that!)

On the front of the box I added two "gauges" I made, and some more small stuff I found, just to make it look a bit more busy. On the left outer side of the box is a sampling tube from my old chemistry box (thank you dad! :-)  ) protected by a handle. 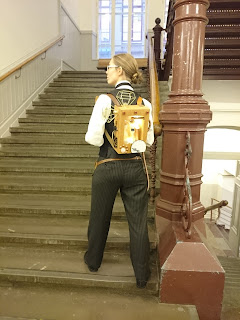 I am very happy with the result! It was fun to do something different than I usually do, and I like the outcome. Unfortunately, the paint is coming off on both the hose and the closing mechanism for the box, so I might have to re-paint it and then seal the paint somehow.

The facts:
What is it? A steam punk "ghost detection" backpack for an outfit.

Pattern: None, but lots of inspiration from spending too much time looking at pictures at Pinterest.
Total cost: About 700 kr, 70 EUR, 75 USD for the stuff I bought.

Hours to complete? Maybe in the order of 30 h? Plus some hours thinking of it when I was supposed to do something else, and some hours searching for the materials.
First worn? At the SteamCon steampunk convention in Gothenburg in November 2016 (my blog post of that here).