There is much to say about what happened in the world in 2016, but here I will keep away from that and just sum up my costuming year of  2016. As I had decided that I was more inspired by steampunk and cosplay than by historical, I did not take part in Historical Sew Monthly this year.

My first big project turned out to be historical. It was not at all planned, but some friends of my was so enthusiastic about the Natural form era that I could not resist it, and as usual, after looking at fashion plates I was sold. I landed in 1876. I had to do quite some work to figure out the skirt supports, as it was a new era for me. It also was a bit tricky as 1876 had a transition fashion between the bustle and the slim natural form. When I started at the actual dress, an injured toe at a vacation meant that all the hand finished trim was done a lot sooner (and in larger amounts) than expected. 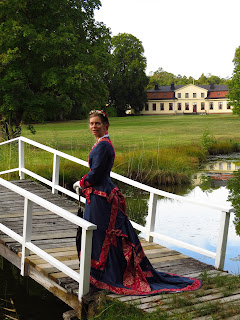 After this very feminine dress, I went to menswear steampunk, inspired by English 1500's gowns and the BBC series Wolf Hall. Here is my steampunk Tudor crossover. I made the gown and hat, and decorated the bag. I also made my first cosplay: a Star Trek Voyager uniform. I was not attempting to have every seam and fabric exactly as in the series, but I am happy with the overall look. As a big fan of Captain Janeway in Voyager, I have wanted a uniform like this for a long time! Here shown cross-nerding (yes, I do like to make up new words!) with a Doctor Who Tardis at NärCon in Linköping. (At which I felt a bit old - some of the participants was probably not even born when Star Trek Voyager was first aired...) 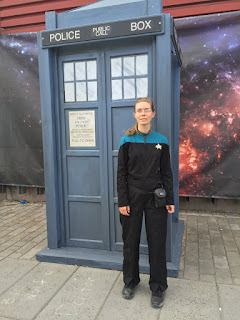 Then, more steampunk: the ghost detection backpack. It was both challenging, scary and fun to work with hard materials and screws and glue instead of fabric and thread, but the box still has not collapsed, so I guess it worked out :-) I worked quite a lot on this leading up to the steampunk convention in Gothenburg in the beginning of November. 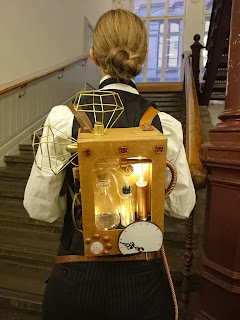 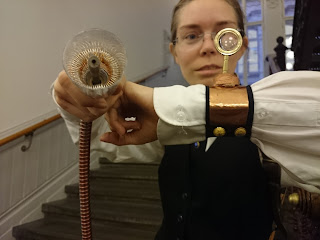 After the steampunk convention, I had a lot to do at work, so I was too tired to do any sewing at all. Now, I am slowly beginning to get my inspiration back. I have unusually few plans for next year thou. I will most likely be going to another steampunk convention, so I want something new to wear for then. I am currently planning a crinoline gown that is half forest fairy, half mechanical. We will see later how the turns out. I am currently in the phase when the gown is so amazing in my head that I am afraid to begin sewing and see it with the inevitable flaws of reality.
Except for the forest mechanical dress, I have no ideas at all. I should make myself like two or three historically inspired blouses for modern wear, as I never find anything I like in the stores, but that kind of sewing never seems to happen - there is always a more inspiring costume up ahead. Let's see what actually happens in 2017!
Upplagd av Sara ÖT kl. 08:39