Inspired by the upcoming "War and Peace" challenge of Historical Sew Monthly, I decided to make another version of my Steampunk Victorian women's uniform. I wanted a version that was just military inspired, not really a uniform, so that I could wear it for historical events as well. I wanted to make some accesoars so that by choosing hat and over skirt, I could wear the dress both as (kind of) historical fashion, and as a steampunk uniform.

The first part to "demilitarize" it of course was to remove the epaulettes. They can easily be basted back on. After that, I needed to make a hat to wear instead of the military cap. The hat has its own blog post here. 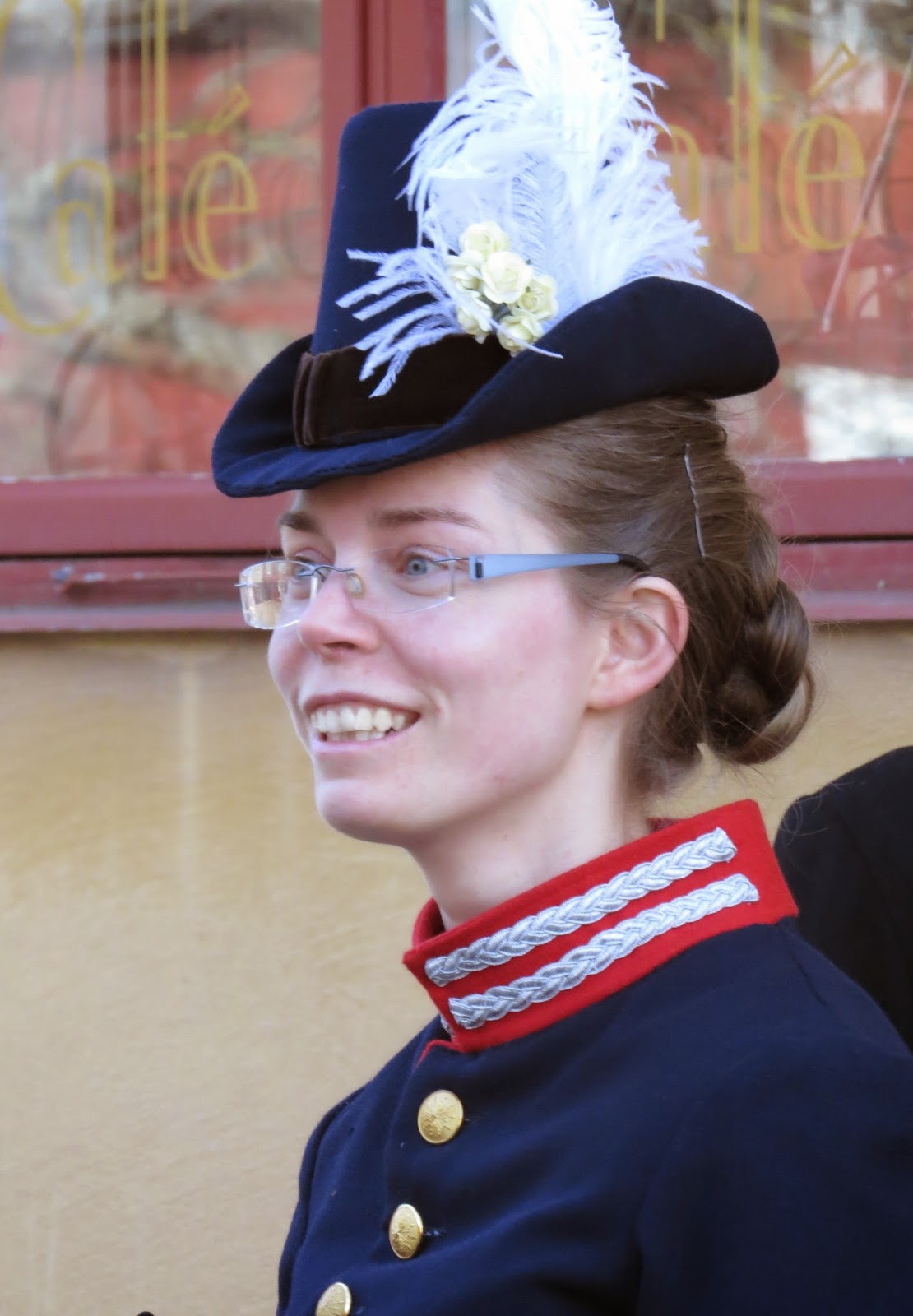 I then decided to remake the striped asymetrical overskirt, to go better with this dress. I was not so happy with how it had turned out anyway. First, I redid the back part of it. Before, it had like eigth bornouse pleats, but that turned out to be a bit to messy and uncontrolled, they just collapsed in a heap. I removed two of them, and sewed down the remaing six parwise and basted them to the skirt under, so that they would lie as I wanted. This is the back, before and after. When I was at it, I also added a cotton velvet band to the inside of the hem of the under skirt, to give it some more volume and protect the hem (the wool is very thin so it does not wear so well.) To really get that 1886 "shelf bustle" effect, I added a small cushion on top of my ordinary bustle. (Yes, a real cushion. I borrowed a small travel cushion I made for my husband some years ago for a hiking trip.)


I then added some red details to the over-skirt, to match the piping on the bodice. On one side, I was inspired by pictures like this,


and added "tabs" that are the same shape and fabrice as the epaulettes on the bodice was (a blink to the uniform that inspired it all). I also added a pleated part to the other side of the skirt. 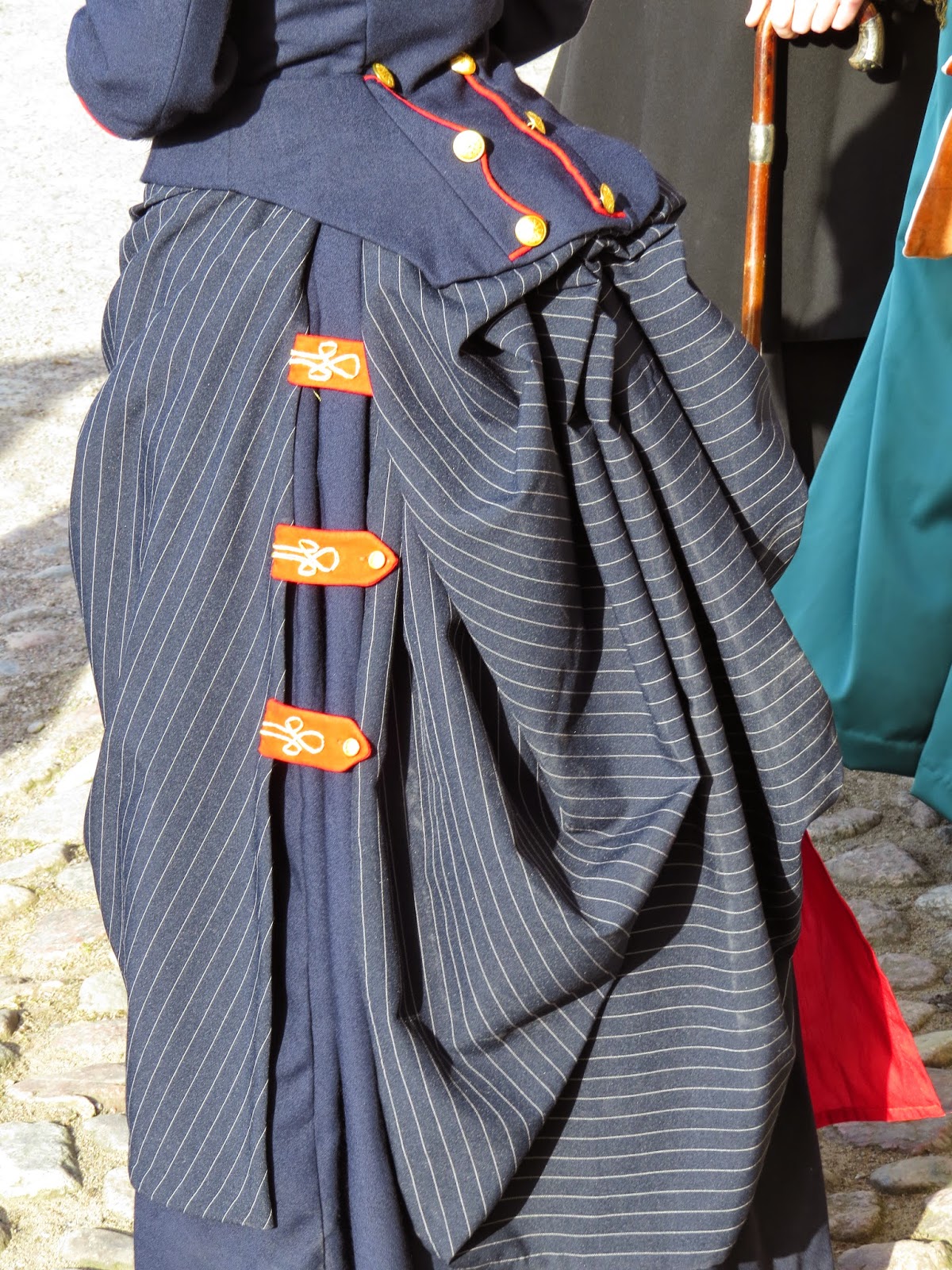 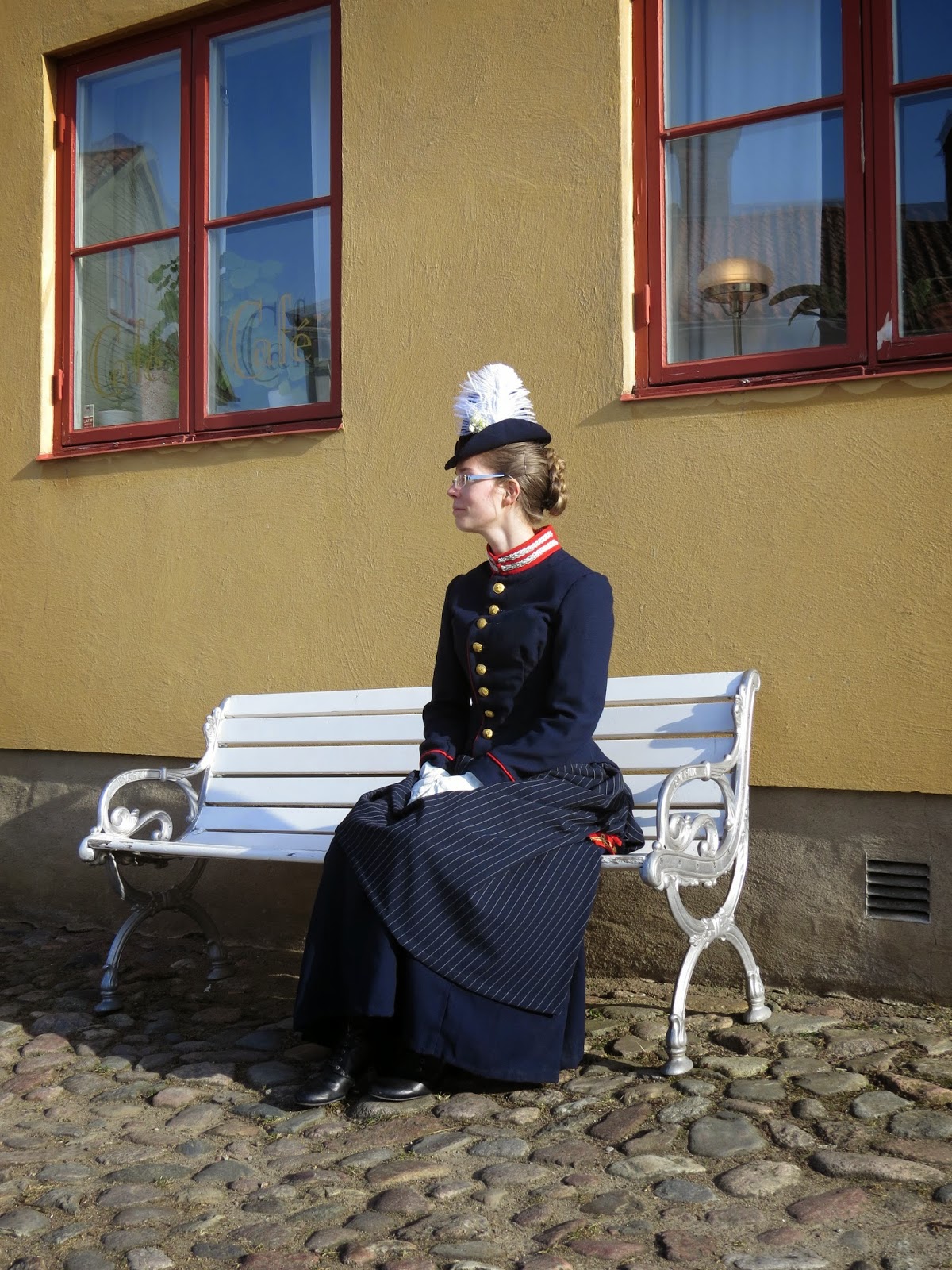 And the facts for HSM:

What the item is: Modifying a steampunk victorian oufit to an that is merely military inspired fashion. Mainly the work involved was to make a hat, and modifying an overskirt to go with this bodice.

Fabric: Buckram, fleece (from an old IKEA blanket...) and wool for the hat. Small scraps of red wool and a piece of a very synthetic looks-a-little-bit-like-silk fabric for the skirt.

Notions: Some synthetic cold cording for the embroidery on the tabs on skirt. For the hat: Two different types of wires from my jewelry making box, cotton velvet band, and a feather and paper flowers cannibalized from another hat.

How historically accurate is it? Decent. The main look is rigth, the materials are what I had at home. It might be a bit too military looking maybe, with the silver bands on the collar. Also, piping seems not to have been popular during this years even if it was very common in the earlier decades.

Hours to complete: 5-8 h for the hat, maybe 5 h more for the rest (making the tabs took some time).

First worn: for a historical "fika" (drinking coffe and eating sweets) in Gamla Linköping the 15th of March.

Total cost: 60 kr (about 10$ ) for the velvet band for skirt and hat, everything else was left-overs from other projects.

Why is is War and Peace? It fits the challenge in three ways, I think. The first is the most obvious one: a dress very inspired by an specific military uniform. The second one: I did a remake of an earlier garment and made a hat, thus updating an entire outfit with small means. I think that in hard times, people would be remaking and reusing things even more than they would otherwise. Third way: Peace! If I was not living in a part of the world that is rich and peaceful, I would probably not be able to spend time and money on something that is purely for fun.