For the "Heritage and Heirlooms" theme of Historical Sew Monthly in August, I decided I wanted to make a "gröntröja" for my mother, to wear with her folk costume from Gagnef in Dalecarlia.

The different folk costumes in Sweden have a very varying degree of historical accuracy. Some was recreated or even invented in the 1970's when folk costume went popular, and is only loosely based on some remaining piece of clothing. In other regions "local costume" (as opposed to more generic fashionable dress) lived on very strong, so the folk costumes from these regions are much closer to what someone in say the late 19th century would have worn. The Gagnef costume is an example of this more historical type of folk costume. Therefore, I wanted to make this gröntröja, but more as a piece of historical clothing than as modern folk costume. Gröntröja means something like "green bodice". It was worn when a warmer outer layer was needed, and was worn only for big festive occasions such as weddings.

I based my gröntröja on a gröntröja from one in a museum, from late 19th century. I did try to make it look about right, but I have not tried to recreate it exactly.

And the heritage? My grandmothers grandmother lived in Gagnef, and she was wearing the traditional dress all her life.


In these pictures, my mother wear the gröntröja with her modern folk costume. I suspect that the length of the skirt is an example of something that was modernized when the traditional dress was made into folk costume, but I still think that it is a beautiful costume. 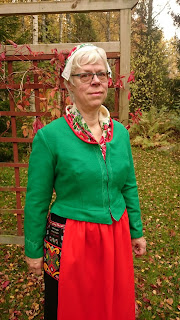 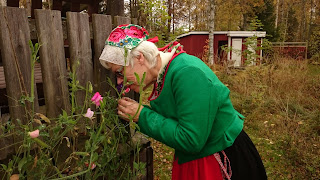 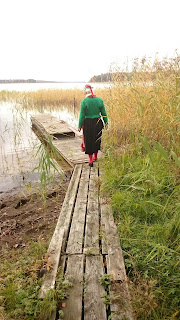 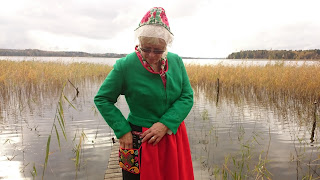 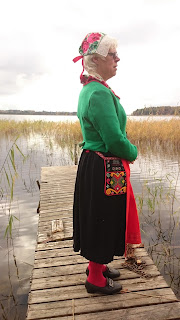 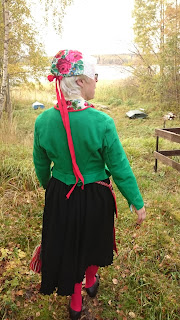 The facts for HSM:


What the item is: a gröntröja ("green bodice") for folk costume from Gagnef, Dalecarlia, Sweden.

The Challenge: #8: Heirlooms and Heritage

Pattern: none, based on a standard bodice block and adapted

How historically accurate is it? 80% perhaps? The cut is ok, and the constructions is like what I could see on the photograph of the garment I based this on. Also, machine embroidery is correct for this garment :-) But the polyester thread and the cotton lining is not right, and the fabric is way too coarse (I did not feel like paying something like 800 kr/meter (100 $/meter) for fine quality wool).

Hours to complete: Not less than 10 h.

Why is it heritage and heirloom? My grandmothers grandmother lived in Gagnef, and she was wearing the traditional dress all her life.
Upplagd av Sara ÖT kl. 11:23