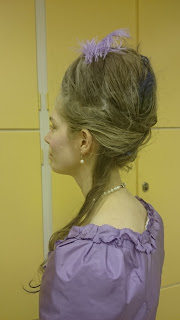 Last Saturday I attended "Ball of all times" here in Linköping. We started the day with dancing training, with dances from 12th to 19th century. Then we got a few hours to change, and then it was time for eating lots of great historcial food and dancing. I did not take many pictures exept for those I did to document my Big Hair, so this post will be as self-centered as usual even while there was alot of very nice people and a lot of good looking clothing.

I had decided to use my 1770's silk Anglais a la polonaise, as I had only used it once, and I was not that up to making a new ball gown. (As I was all absorbed in making my 4th 1880's day dress. Maybe I should start to have a bit more variation in my projects? No! ) To get something new, I decided to try making a large hairdo. As I have lots of hair, I used no wig, but a lot of padding.

For padding, I bought a "hair donut", meant to be used for making neat hair buns. I got the XXL one, and simply pinned it on top of my head. As it is made of some net-like material, it was very easy to pin in it.  Then I used some of my hair balls as padding at the base of the donut. Then, I spent about one hour and three packets of hairpins on pinning strands of my hair on top of the donut.

I used hair wax instead of 18th century pomade. Then I used maize starch to powder my hair. It worked quite well to make the hair a bit lighter (greyer, in my case. ) In the back, twisted some of the strands before pinning them, to make it a bit more intresting. I had given up on those elegant rolls of hair beforehand, and chosen to make a quite simple hairdo. I had intended to curl the loose lock of hair, but run out of time and decided to leave it. 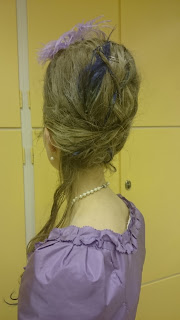 For once in historical costuming, the blue ends of my hair is not totally anachronistic (just a little bit, being way to bright) as the hair sometimes was powered in colors like blue or pink during this period. Historical or not, I like how the blue strands look. Surprisingly, this hairdo was also very comfortable. As the padding was very lightweight and I only used my own hair, it did not weight more than any modern hairdo. Also, having all the hair on top of my head instead of in for example a bun at the neck meant that the weight did not strain my neck at all.