Last year, I was going to a steampunk convent, and of course I wanted something new to wear. I have long been wanting a Swedish uniform called uniform m/ä (that means "model old"). This is because I made military service in 2006 in the Central Band of the Royal Swedish Army, and our parade uniform was the m/ä. We even got our uniforms fitted by a tailor, to look our best at parades. I felt very good looking in mine, and was not happy to turn it in as a left for the civilian world after eleven months of playing and parading (and polishing shoes).

However, while it is sometimes possible to find such uniforms, I had not even tried to get hold of one in my size afterwards. It seemed pointless to try to find a (male) uniform that would fit me, when I hardly can find even women’s pants that fit me. It also seemed a bit too daunting to make a copy of tailored uniform myself, so I had given up on getting one. But then I realized that the m/ä uniform is from 1886, which is to me about the best looking year in history. I also stumbled on this really nice work of making a Star Trek Victorian bustle dress. I then decided to make a female version of the m/ä. What could it have looked like in a world where they had had a women’s version of the uniform, following fashion? As the fashion was quite strict in 1886 and military inspiration was popular in women’s fashion, it seemed a good match. I had a thin dark blue wool in my stash, which was just enough for the skirt and jacket. For buttons, I found very nice buttons originally from a telegraphist's uniform, very steampunk looking and in the right shape. I tried to stay close to the details of the original uniform, while changing the shape.

I had some problems with the jacket. I wanted it to be a bit more relaxed in the fitting, so I could wear it without a corset. I tried to achieve that by using my 1880’s TV bodice pattern, but letting out the side seams. Not until the bodice was finished, complete with piping of the front seam and button holes center front, did I realize that it does not work that way. It was too big over the bust, the collar was too wide, and somehow it was too long from collar to waist, so it sort of buckled. Afterwards, it feels quite obvious that making a tight fitting garment in a larger size is not a good idea! Of course is will hang oddly that way. Also, i have learned that wearing a bustle without a corset to even out the weight on the waist is not a good idea. I have since tried to fix it as much as possible, but it is hard to make it fit properly as the button holes are where they are, so the center front can  not be changed. I also think the fabric is too thin, even when interlined with cotton.


Even with the fitting issues thou, I am very happy with it. I feel just as smart as I did in the original m/ä uniform. I also got quite a few compliments for it at the stempunk convent, and people recognized the inspiration. I even got a comment from someone that had been an officer, that it was not proper to wear a hat indoors with a uniform, and not to salute indoors either, so obviously it had enough uniform-look. (I knew about the hat and saluting, after the military service, but after all it was steam punk, and it is more fun to wear headgear. And how often does one get the chance to salute crisply when posing for a picture? :-) )

Here are some more pictures from a photo session in Gamla Linköping (that "just happended" to end up with us eating lots of waffles and drinking tea...). 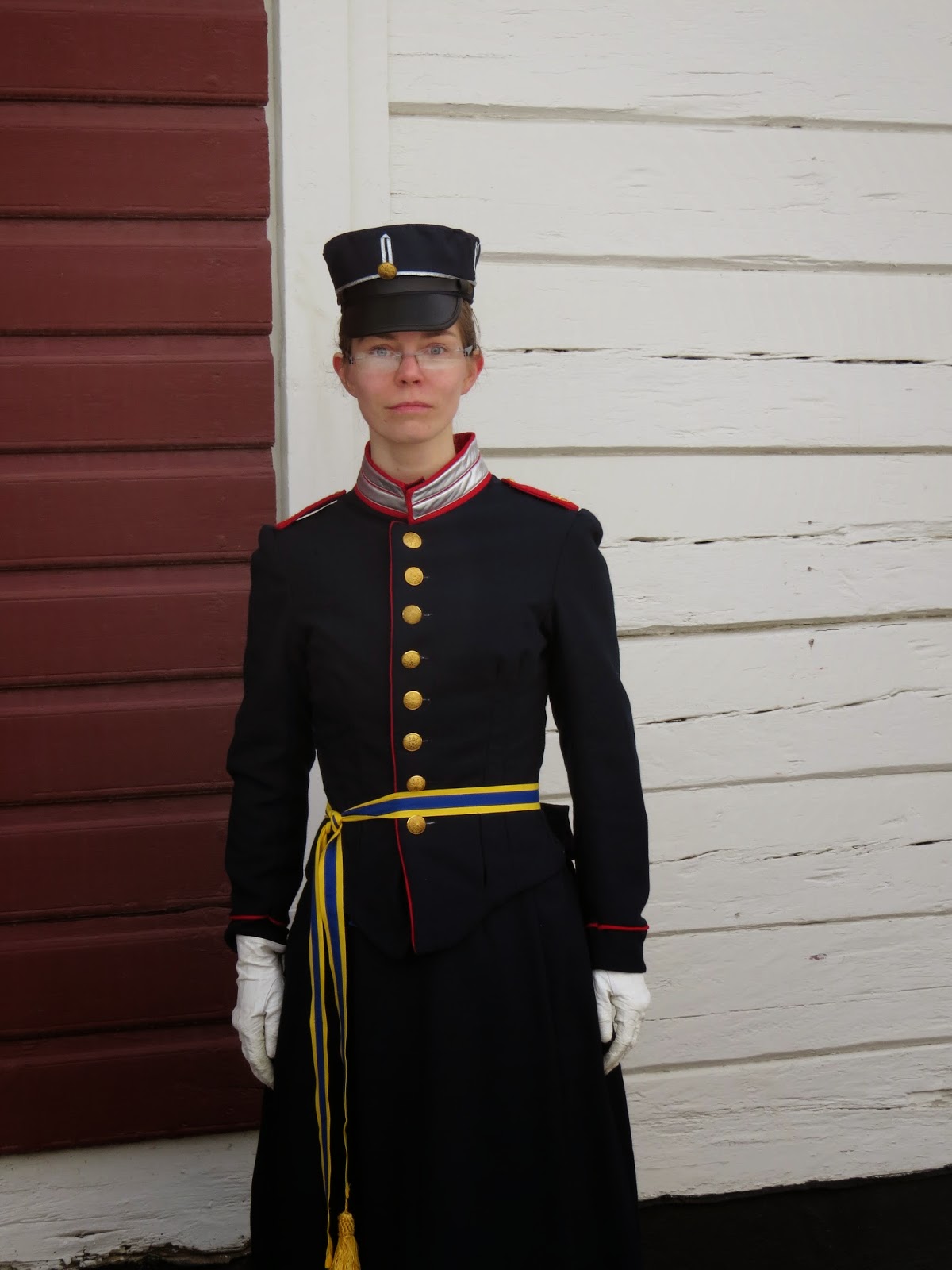 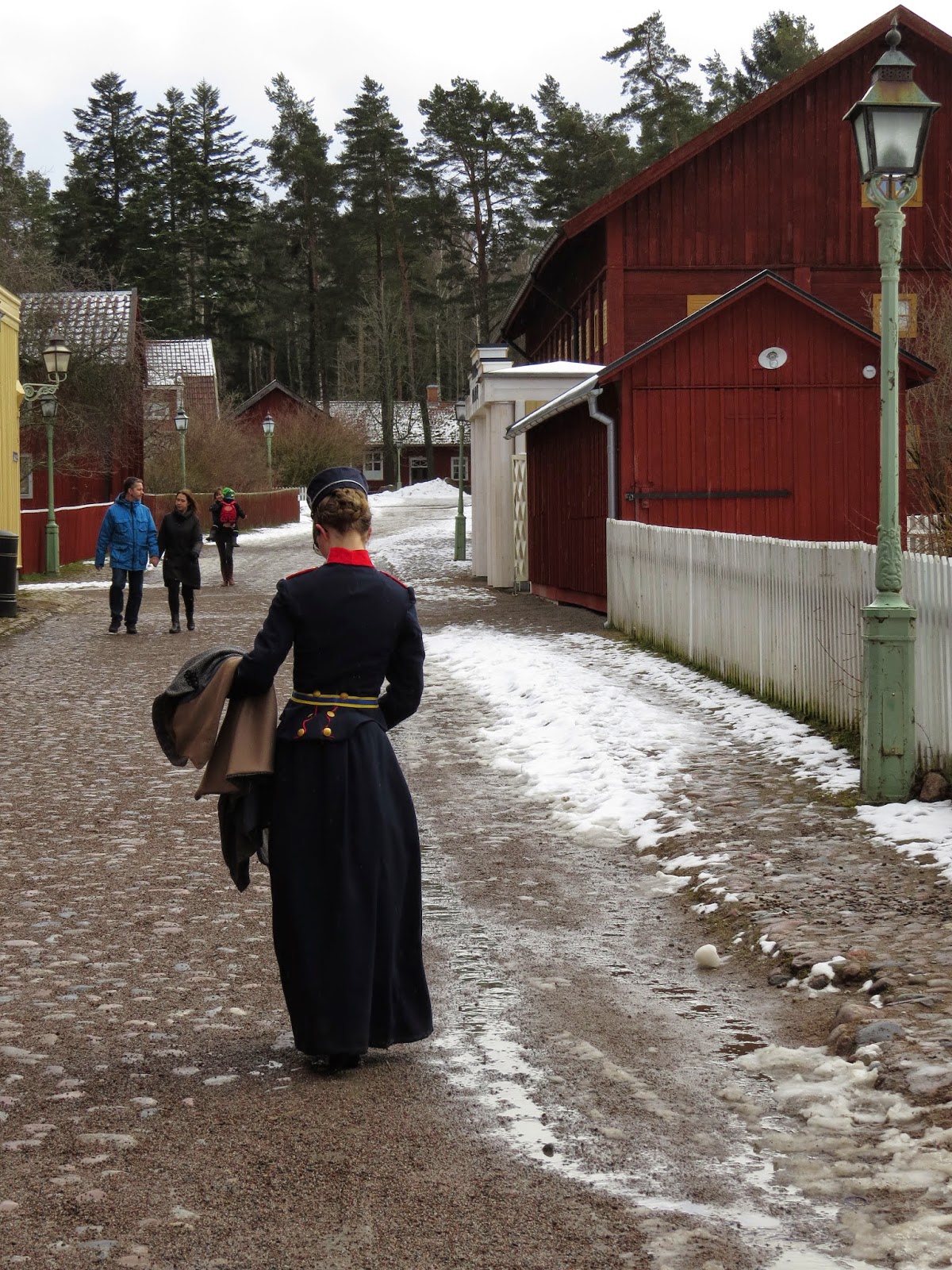 With the uniform, I wear a belt, white gloves, men's shoes, and a medallion (modern and my own, but it fits the costume decently). The gloves are the one my husband wore with the uniform when he was in the same band, so those are the truly authentic piece of the costume :-) The hat is a modified cap I bought. This is a picture of what it looked like from start, and after modification. I inserted buckram and millinery wire in it, and sewed on band and button.