Steampunk dress - finding my way to the "right" design

I have already shown the forrest/mechanical steampunk dress I have been working on for a while. In this post I will show how its design changed with time, and my thought behind the design choices. I will also give some more details on its construction. Lots of text this time, but there will be lots of pictures as well!

This project has taken a lot longer to finish than expected. The main reason was for this was not because it was hard to construct or sew, but that I had a hard time getting the design like I wanted. I had a sketch to start with, but when I started I thought that it was both hard to make, and would not look like I wanted. This means that this gown have been a half year of pinning stuff onto stuff, trying to find out how I wanted it to look. Here I will shown some of the in progress photos I took, so you can se how it evolved.

Normally, I want a story or character behind the dress, when doing steampunk, but this time I just went for the visual elements I felt like having. This way of designing meant that I had no problem making for example the staff without having an idea of what the character would use it for. Even then deciding on those took way to many hours stuck in pinterest looking at other people's work. Also, I want every new project to be more spectacular than the last one - as I have relatively few opportunities to wear steampunk, why would I wear anything I like less than the ones I already have? As I like both my uniform and my ghost hunter outfit a lot, this did make it a bit hard to come up with something I was sufficiently enthusiastic about. In the end, I decided that I wanted to combine green with the look of plants with silvery mechanical parts. Also, I wanted a more romantic style than I usually do, and I aimed for the look of lots of details everywhere that I often admire in other people's steampunk work. Actually, I first wanted a green fairy gown, but I decided it would be  much more useful to me if it was steampunk, and I then I liked the idea to "steampunk it" by combining soft green with hard steel. The brown velvet was a later addition.
This is the first drawing I made. As you can see, it is a lot of crinoline and a quite small dress. The idea was to make half of it look mechanical like some kind of steampunk robot dress and the other half look plant-like. 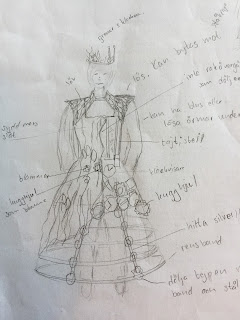 I soon realised this would take A LOT of work, in making or sourcing the mechanical parts, so I thought I would just make some mechanical parts show through holes in the green part of the dress.

Then I started making it, and ... it changed. Here is a lot of pictures of how the dress looked like during different stages of experimentation/construction. Cronological order.

te
﻿
﻿﻿﻿﻿
﻿﻿﻿
I have had the problem that I wanted to include way too many ideas in the same dress, but finally, I am happy with how it look like.

I do like the outcome, but at some points I was quite tired of this project. As I had trouble finding  a look I liked, I could not spend much time sewing, so the progress was slow. Also I was afraid that I would not be satisfied with the end result, despite all the thinking (luckily I was wrong about that!). From this project, I have learned how much longer it takes when you make things in the wrong order. I have also learned that it became harder for me to design it as I had so few limitiations in the design. I would have thought that that would make it easier, but it did not, not for me, I did not have to think "why would a character wear something like ..., what would a character like ... need?", and I did not need to keep in line with historical fashion either, so it was very hard to choose, and to keep from using too many conflicting design elements at the same time.


Which version did you like best? Have you had a costume project that transformed during the sewing process, or tried to fit way too many ideas into a single garment/costume? Please comment and tell!

Pattern:
For bodice, I used Truly Victorian 1859 Pagoda Bodice, omitted sleeves, and used the alterations for fit I made for my 1861 dress. The skirt is just a pleated rectangle (as typical for the earlier crinoline era dresses), with flounces on (also common in that fashion). It would have been a lot easier to attach the flounces before I pleated and sewed the skirt to the bodice, but at that stage I had not yet decided to use flounces, so that gave me some extra work. The back drapery is also a rectangle. The crinoline is based on my earlier 1860's crinoline, but shorter and with a bit more width at the top.

Total cost: perhaps 700 kr, about 70 Euro (in fabric, clasps, leather bands, and steel for crinoline). I also paid 240 SEK for a very large box of Clock hands, of which I only used a few for this dress. I also had to make investments in glue, paint, craft foam, and such (for the crinoline decorations), of which I used just a little for this project.