Previous Saturday, I went to the big cenvention NärCon here in Linköping. Most people does cosplay, and there are lots of anime/manga/games character I do not know, but I had arranged a small steampunk meetup.


I went there with my friend U, but sadly I forgot to take a picture of her nice Spirited Away dress. I also got the chance to meet Johanna of Costumekullan in person for the first time, and we discovered a shared like of 16th century dress (and, sadly, lack of events to wear them at). Also, I really like her fan fashion dress! I think I need more fan fashion - clothes that can be  worn for normal, but that other fans can recognize.
For the occasion, I wore my Steampunk mechanical/forest dress for the first time! The costume consists of the crinoline, dress, shrug/bolero, hat and staff , and belts with a bag I decorated for the Tudor steampunk gown. Everything is made by me, except for the undecorated bag. My previous steampunk projects (in fact, most of my costuming except for the 1876 dress) are a bit severe, and often inspired by men's wear. Here, I wanted more girlish, and I also aimed for the look of lots of details everywhere that I often admire in other people's steampunk work. Thank you U for these pictures. 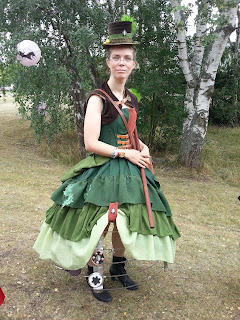 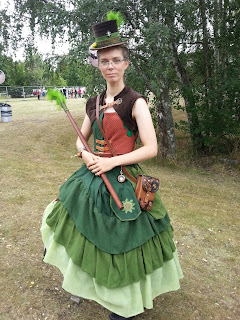 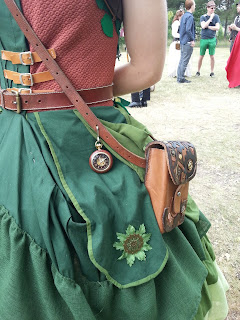 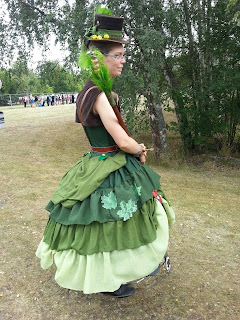 The staff was fun to have, and I only forgot it and had to go back for it once. However, I think I need to practice posing with it to make it look good, as I did not know what to make of it. It also was the first time I used makeup with a costume. I used a very simple one, but it was interesting to see the difference - as I do not normally use makeup, I felt very different. With a dress like this, I felt it was not so bad if the makeup was visible (overdressed is basically the idea for lots this kind of steampunk anyway), so I used a lot of it, but still I can hardly see it in the pictures. I guess my glasses hides most of the eye shadow...

The dress was surprisingly comfortable for a whole days wear. I do wear a corset, to spread the weight of the crinoline, but the corset is not tightly laced. Also, as I used cotton as base and a shear curtain polyester fabric for flounces, the dress is not at all heavy. The neck opening as opposed to a high necked wool dress and the crinoline which keeps the skirts away from the body also contributes greatly to make the dress cool.

All in all, I am quite happy with how the dress turned out, but I think I have changed almost everything from the original plans (See future post!) and as a result, I think it looks a bit too busy, so I want to do some more changes before I wear it again at SilwerSteam convention in September.
Upplagd av Sara ÖT kl. 11:17