For my forest/mechanical steampunk dress, I made some accessories, to go with the crinoline and dress (a post about the finished dress will come soon). 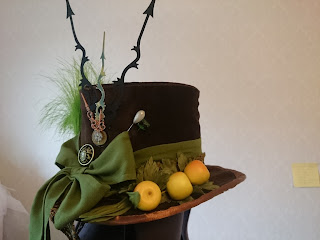 The hat is a 3/4 sized top hat, which I made in brown velvet. The pattern is my own, and quite simple. I just had to do some testing to find a size and proportions I liked (for some reason I don't like wearing those mini top hats that are so popular in steampunk, even if I think they look good on other people.) Then I made it up the same way as my previous hats, with wired buckram, as described here. It took maybe 3-4 hours, as hand sewing the band on the brim took its time. Then I tried to put as much decoration stuff on it as possible without it looking too odd. I still think I am going add some more. Sewing all the decoration on was a bit fiddly and took a while, but I did not want to use glue, as I have a habit of wanting to change the trim on my hats (or just add more, as turned out to be the case here). The very green thing is fake feathers, made of polyester. I instantly knew I needed them for this dress when I found them at Easter. 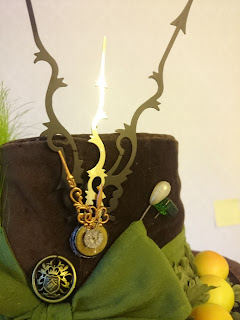 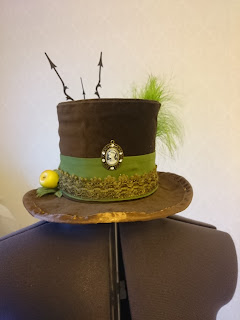 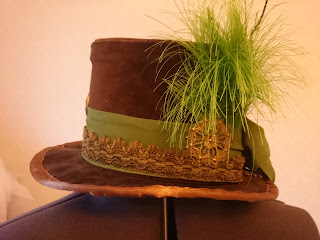 The staff is quite random, thrown together the night before just before I felt like having some prop. Also, I wanted to make use of more of the very green fake feathers, and of the cooper coloured globe things I cannibalized from a home decor LED light thing (and I also wanted to use my new glue gun!). 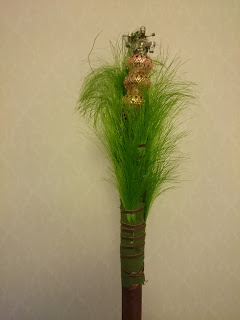 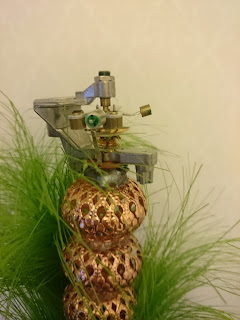 I also made some kind of shoulder garment, I am not sure if it could be called a bolero or shrug. Anyway, it is made from the same velvet as the hat, lined with cream cotton, and piped with polyester piping. Using silky piping with the velvet meant that things never stayed put even when pinned, so I hand sewed the whole thing. The result is looking a bit wobbly, but I still like it very much. I even allowed myself to add two gears just for decoration. Normally I prefer to be restrictive in my use of decorative gears in my Steampunk, as it is so common, but here they fit so well I could not resist it. 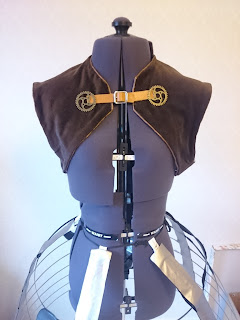 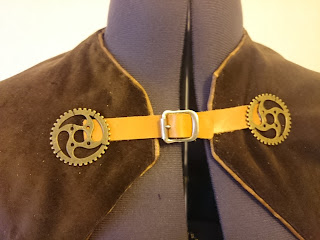 And a sneak peak of them worn together with the dress. I spent the overwhelming majority of the time on the dress, but when wearing it, I think I am most fond of the look of the shrug and hat. 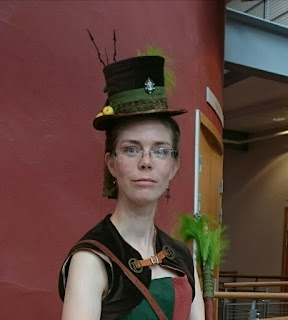 Have you made a project where the accessories became your (or other people's) favourite part? Please comment and tell!
Upplagd av Sara ÖT kl. 09:57